December 15, 2009. Our Church's Participation in the Dialogue Between the Orthodox Church and Papism

Tuesday, December 15, 2009, Metropolitan Hierotheos on the Current Dialogue With Rome

(This statment was an intervention by His Eminence addressed to the Hierarchy of the Church of Greece, which was recorded in the Minutes of the Synod.) 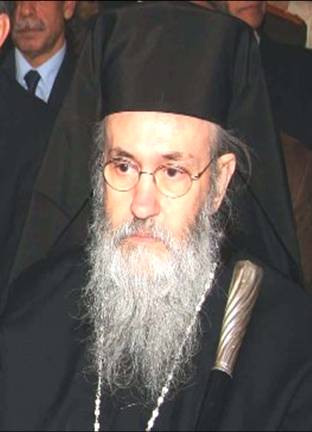 The matter of our Church's participation in the dialogue between the Orthodox Church and the "Roman Catholic Church" - but more so the manner in which She is participating - is a huge one; therefore I shall limit myself here, to only briefly presenting a few views on the issue.

1. It is necessary for the dialogue to take place, but it should be with the necessary theological, ecclesiological and canonical prerequisites. In other words, the Church should not, in the name of the dialogue, deny Her theology, Her ecclesiology and Her canonical law.

2. Although there may be issues that are still pending (as is the issue of Unia), as well as other, basic theological issues (as is the teaching of "actus purus" which clearly affects Papism's overall theology - the "filioque" - and ecclesiology) - nevertheless, the matter of associating the primacy with conciliarity can be discussed, given that this was a basic issue that had preoccupied the first millennium.

It is my view, that the gradual severing of Old Rome from the Patriarchates of the East had begun with the issue of the Pope's primacy in the Church, and at a later stage with the Frankish imposition of the "filioque" in the theology of Old Rome. In other words, the Pope could never reconcile himself with the distinction of equal honour that had been rendered to the Bishop of New Rome by the Fourth Ecumenical Council.

3. Even though the dialogue on the association between conciliarity and primacy is important, and it is regarded that they should move on to other issues through this prism, nevertheless, there are certain problems which need to be pointed out.

First: The way that our Church is participating in the dialogue is not appropriate. It is taking place with the utmost secrecy. The texts, which have been endorsed by the meetings so far (Munich, Bari, New Balamon, Ravenna) and by the representatives of our Church, are problematic. There has never been any discussion whatsoever in the Hierarchy as to the stance that our delegates should take in these meetings, and furthermore, those texts have never been discussed in the Hierarchy, even after being endorsed. Therefore, the Conciliar polity in this instance is not being observed. We Hierarchs who are the expressers and the guardians of the Faith have been marginalized - left "in the dark".

Second: The statements made by the Orthodox and the Roman Catholic representatives are evidence of this problematic status, because they are merely proving that there is indeed an endeavour to bring on the "union of Churches" in a not-so-clear manner. These statements are available, should it become necessary to quote them.

Third: During the first millennium, the Orthodox Church had confronted the issue of an honorary recognition of the Pope of Rome. This occurred during the Council at the time of Photius the Great (879-880 A.D.), which, by many Orthodox, is regarded as the Eighth Ecumenical Synod. These two kinds of ecclesiology - that is, of Papism and of the Orthodox Church - had been put forth during this Council. Patriarch Photius had acknowledged a primacy of honour for the Pope, but only within the Orthodox ecclesiological framework: ie, that the Pope has a primacy of honour within the Church, and that he cannot be placed above the Church. Therefore, in the discussion pertaining to the primacy of the Pope, the decision of this Council should be taken seriously into account.

Fourth: Whereas in the Orthodox Church the administrative system is Conciliar, in the "Roman Catholic Church" the administrative system is "Pope-centered". This was made abundantly clear in the decisions of the Vatican II Synod and in other synodal texts, in which it is asserted that the Pope is the "leader of the college of Bishops", the "rock of the Church", the "eternal and visible principle and foundation of unity, who unites the bishops between them, as well as the multitude of the faithful", the "representative of Christ and the Shepherd of the entire Church, who has full, supreme and universal authority in the Church, which he is always free to exercise". One other claim in Papism's ecclesiology that should be underlined is that "there cannot be an Ecumenical Synod, if it is not validated, or at least if not accepted, by the successor of Peter".

Therefore, this Pope-centered perception and the Pope's predominance - even above the Ecumenical Synods themselves - negates synodicity, thus constituting another ecclesiology altogether. The Papist claim therefore, that the Churches (that is, the Orthodox ones) that do not acknowledge the Pope as their head are "deficient" - that is, that they are lacking, cannot be accepted.

Fifth: Despite its many important points indicating how the primacy of the Pope functioned during the first millennium, nevertheless, in the draft of the document that is to be discussed in Cyprus in October, there was no mention of the association between the Pope's primacy and the Ecumenical Councils.

A document that does not possess a clarity of thought cannot prevail, nor help those who have broken away to be reincorporated into the Catholic Church.

Sixth: It is a fact, that the Pope's basic problem is that he has never in essence accepted the 28th Canon of the Fourth Ecumenical Council, which gave equal honor to the Church of New Rome, and the right to ordain Bishops in barbarian lands. This disdain is also proven by the fact that the Pope himself was never present in any Ecumenical Synod - only his representatives.

Seventh: When one studies the documents of the Primates of the Orthodox Churches, one will notice that they may agree on the continuation of the dialogue, however, they also place clear-cut prerequisites, such as -for example- the outright condemnation of Unia, and, through the issue of the primacy, continue with the dialogue on other essential theological issues.

Eighth: The Patriarchate of Moscow had departed from the Meeting in Ravenna - the reason being the presence of the Archbishop of Estonia - and consequently did not endorse that Meeting's document, just as the Patriarchate of Georgia did not endorse it. It is necessary to seek out the decisions of the other Orthodox Churches on the Ravenna Document.

Following all the above, it is my suggestion that directions be given to our representatives, pursuant to a discussion and decision by the Hierarchy, as to what they are to support during the dialogue, and to discuss the issue with the Hierarchy, after the endorsement of the Documents.

At the same time, it should be declared explicitly, that if our representatives endorse a text that is outside the guidelines that will be given to them by the Church, then that text is not to be considered binding by our Church.