November 13, 2013. The Theologian of Empirical Theology

The following homily was given on the feast of St. John Chrysostom on 13 November 2011, in the church of Saint Dimitrios of Nafpaktos, in order to commemorate the ten year anniversary since the repose of Fr. John Romanides (+ November the 1st, 2001)

Our Church today celebrates the memory of Saint John Chrysostom, a great Father of the Church, a fiery and inspirational Archbishop of Constantinople-New Rome, and a preacher who is characterized as a "beautifully voiced nightingale of the pulpit". Perhaps there has not emerged in history a more brilliant preacher of the divine word. If one reads his writings they will distinguish a God-loving heart that suffered for the love of God and struggled out of his nostalgia of heavenly citizenship. His words were fiery, because they came out of a furnace of love for God and man. Characteristic is a troparion from the service to the divine Chrysostom: "Let us melodically hymn ... the golden trumpet, the divinely-inspired organ, the heavenly nous, the depth of wisdom, the cup of pure gold."

Saint John Chrysostom, interpreting the passage of the Prophet Isaiah that says: "For behold, the master Lord of Sabaoth takes away from Jerusalem and from Judah supply and support, ... the judge, the prophet, the contemplative" (3:1-2), notes the difference between a prophet and a contemplative. He says: "A prophet is one thing and a contemplative another." A contemplative speaks of the future, after contemplating the experience of things, but a prophet speaks by the Holy Spirit. And he notes: "Just as there is a difference between human wisdom and the wisdom of God, so there is between the contemplative and the prophet." Eventually, a prophet is not only one who heralds things to come, but he is a teacher, an empirical theologian that guides people to live future things in the present.

The world today is filled with contemplatives, thinkers and wise one's according to their own understanding, who judge on the basis of their own minds and human wisdom, while people today need prophets who will commit their nous to God. As inhabitants of a country we are interested in the way society is organized, which is related to a fair distribution of goods, but as Christians we must be more interested in the way we will obtain communion with God. Unfortunately we have suffered major damage by turning our nous to earthly matters, to sociology, while we have need for God. In one of his homilies Saint John Chrysostom speaks personally to every hearer of his, saying: "Our citizenship is above, here below is the path", and that we are not "citizens" but "sojourners". Everyone today is engaged in the city below and not with the city above, the heavenly city, and they do not feel like sojourners, but as citizens of this world. Today theologians in the ecclesiastical sense are missing, who will evangelize the peace and the good and will restore the nous into the heart and God with the method of Orthodox piety.

More than sociologists and philosphers, or in other words contemplatives, we have need for authentic theologians. One such work was done by Fr. John Romanides, the teacher of the hesychastic tradition, the "prophet of Romiosini" as they call him, the one who expressed empirical theology. Often he taught that Orthodox empirical theology is not contemplative, but prophetic, and that every Cleric, especially a Bishop, must be a prophet, because where there are prophets, heresies do not grow. 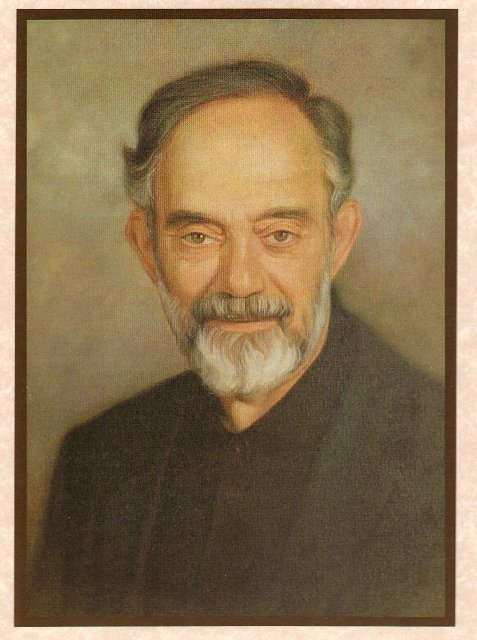 The Sacred Metropolis of Nafpaktos and Agiou Vlasiou, with the completion of a decade following the repose of the ever-memorable teacher Fr. John Romanides, dedicated this Sunday to him, which coincides with the feast of Saint John Chrysostom, and celebrates a sacred memorial service for the repose of his soul among the righteous Prophets, Apostles and Saints, whom he so loved, and has also organized a scientific Conference to be conducted that will deal with the work and teaching of the late Cleric and theologian.

At the end of his life, Fr. John Romanides, by his own decision and by my action, was transcribed from the List of Clergymen of the Sacred Archdiocese of America to the Sacred Metropolis of Nafpaktos and Agiou Vlasiou, without receiving payment, because he had to be listed somewhere as a Cleric. This choice was due to the great communication we had, especially during the last years of his life, after his retirement from the University of Thessaloniki, where, in a certain way, he lived his "theological solitude". I was not the only one with whom he communicated in his final years, since he particularly communicated with others, among whom was Protopresbyter Fr. George Metallinos, who is today with us.

The theology expressed by Fr. John Romanies was not his, it was not a "Romanidian" theology, but a theology of the Prophets, the Apostles and the Saints throughout the centuries who were made worthy to see God in His Light. This was a theology of the uncreated Light, which is why Fr. John Romanides loved Saint Symeon the New Theologian, Saint Gregory Palamas, and generally all the Philokalic and Neptic Fathers who taught on the one hand, that God is Light and is revealed in Light, and on the other hand, that the method of acquiring a genuine knowledge of God is through sacred quietude, as shown in Holy Scripture, systematized by Saint Gregory Palamas and ensured by the Synods of the fourteenth century, especially the Synod of 1351, which can be rightly classified as the Ninth Ecumenical Synod.

Fr. John Romanides, beyond his family foundations, was a true disciple of the greatest Orthodox theologian of the 20th century, the late Fr. George Florovsky. The same Fr. George Florovsky, in a surviving letter of his, which he sent to a Russian in 1960, after critiquing other theologians of his time, writes in the end: "Generally speaking, there are few theological powers that exist in the Orthodox Church today. I pin my hopes on my student Fr. John Romanides who authored three or four years ago a superior doctoral thesis on the ancestral sin, studying the first two centuries (in Greek at Athens) and is now working near me on his doctorate in philosophy at Harvard. In him, on the other hand, there is rather a tendency towards the side of 'isolationism' - a turning away from the West in all things and being isolated within the Byzantine Tradition, or truth, and remaining at the level of genuine theological culture and deep ecclesiasticality." Also, according to a public testimony of a student of both of them, Fr. George Florovsky said: "Be careful, my son, for that which Father John teaches will not only save your soul, but it will make you a beacon of Orthodoxy in a world torn by assimilation and relations. Your mission as a priest is to teach the truth which remains unto the ages, and this truth you will learn from Father John." Indeed, the theology delivered by Fr. John was a theology that could save a person, and was not a theological intelligence that fills the mind with theological knowledge, but a theology that leads to salvation. It was not a contemplation, but a prophecy, or at least prophetic words.

It is clearly seen in those who reflect on various problems in the theology taught by the late Fr. John Romanides that they have accepted various influences from the West, namely Western scholasticism and post-scholasticism, Protestant moralism, German idealism and Slavic nationalism. Unfortunately, such affects have flowed into our country, which is why the theology expressed by Fr. John is important from every side.

In the Conference which will follow after the Divine Liturgy, distinguished scientific theologians will speak, who in various degrees had communication with the late Fr. John and will analyze his life and theological work.

I thank all those who are attending these events to commemorate a great theologian of our time, such as His Eminence Metropolitan Ignatius of Artes, the professors, the monks and nuns, the theological professors, and all those who came from afar to participate in these events. But now it is time to pray for the repose of the soul of Fr. John Romanides among the righteous, whom he so loved.