Saint Kosmas the Aitolos, as an Enlightener of Orthodoxy

By His Eminence Metropolitan Hierotheos of Nafpaktos
Translated by John Sanidopoulos.

Saint Kosmas the Aitolos is a great personality with timeless value and importance. Many texts have been written about him, but he still remains inexhaustible. 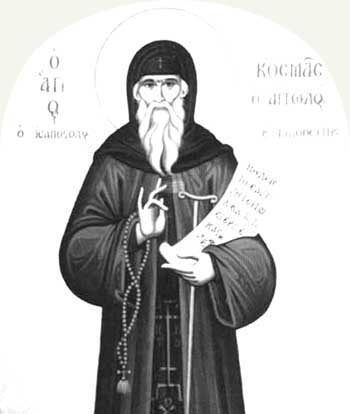 His memory is celebrated on the 24th of August, because it was on this day he was martyred in Northern Epirus. But because his personality is timeless, this is why we can talk about this sacred figure any time. Besides, here in Roumeli, where he was born and raised, and taught also in schools and later journeyed, his memory remains strong.

I would now like to present some thoughts on the educational work of Saint Kosmas.

1. I have studied many biographies related to Saint Kosmas, and almost all the bibliography that references him. And I have noticed that many of them report that Saint Kosmas represented the Enlightenment. So they call him an Enlightener.

This is done because the work of Saint Kosmas was important, for at a time when our country was largely uneducated, he occupied himself with letters, education and the establishment of schools. And it is known that the western Enlightenment dealt with education, which developed at that time (18th cent.) in the West, giving great impetus to education, proposing new ways of teaching and education. It is precisely for this reason Saint Kosmas is considered an Enlightener, and certainly a forerunner of Koraes and many other Greek Enlighteners.

Of course, Saint Kosmas dealt with the establishment of schools wanting Greek children to learn letters. There is an important letter he sent the year of his martyrdom, in 1779, to his brother Chrysanthos who was a Dean in Naxos. Among other things he wrote: "What has happened to me appears unbelievable to many and they even cannot understand it. I say only this so that you can glorify the Lord and rejoice. There is much repentance among the people. I have traveled through about thirty provinces. I have established ten Greek Schools, two hundred grammar schools while the Lord worked with them and confirmed the word by the signs that accompanied it." This summarizes the work of Saint Kosmas the Aitolos, as well as the fact that it took place with the synergy of God and various miracles.

But despite this external similarity of Saint Kosmas with the movement of the Enlightenment, which was taking place at this time in Europe, there is a huge difference in the content of the education that was taught by the western Enlightenment and Saint Kosmas the Aitolos.

3. The teaching and work of Saint Kosmas the Aitolos has nothing to do with all these movements of the Enlightenment which we observe in the West. He operated within the confines of the Greek Orthodox tradition, the center of which was God and His Church. Saint Kosmas spoke of the Holy Trinity, the incarnation of Christ, the great value of the Panagia, the saints, prayer and also so-called noetic prayer, and the purification of the heart of the passions. At the center of his teaching was not reason or the senses, nor so-called deism and naturalism, but God and the way a person can attain communion with Him.

Of course, he urged Christians to establish schools, seeing the illiteracy of the Greeks. He stood against illiteracy, and children who had material goods but no education he would even call "piglets", but the content of this education was different and opposed to the Enlightenment. I will mention three characteristic signs that show Saint Kosmas was foreign to the Enlightenment.

First, he sought to establish schools, but he stipulated the content and purpose of these schools. He said:

"You must all get together and establish a good school. Appoint a committee to govern it, to appoint a teacher to teach all the children, rich and poor. Because it is in school that we learn who God is; who is the Holy Trinity; who are the angels, demons; and what is paradise, hell, virtue, evil; what is the soul, body, etc. Without a school we walk in darkness. The school leads to the monastery. If there were no school, how would I have learned to teach you?

I studied about the sacred and about unbelievers, heretics, and atheists. I searched the depths of wisdom, but all the faiths are false. I learned this to be true, that only the faith of the Orthodox Christians is good and is sacred: to believe and to be baptized in the name of the Father, and of the Son, and of the Holy Spirit."

Second, Saint Kosmas did not have a sense that he was a pioneer Enlightener, but that he was an Apostle of Jesus Christ. His dynamic words, which created repentance and caused a return to God, and the miracles he performed show this reality. Rather in his sermons it appears that he often considered himself, despite his unworthiness, an Apostle. He says this of course very humbly, essentially reminding us of the passage from the Apostle Paul: "For I am the least of the apostles and do not even deserve to be called an apostle" (1 Cor. 15:9). After referring to how the Holy Apostles worked he went on to say:

"It is meet and blessed, brethren, for me, the unworthy and sinful servant, to have a clean heart like that of the pure Apostles and to have that grace of the All-Holy and masterful Spirit, I who have been found worthy to come to your land. But because I am a sinner and I don't have the grace of the Holy Spirit, I beg our Lord Jesus Christ to send His grace from on high and to bless your land and your possessions and the work of your hands. And first, to have compassion on us, to forgive us our sins, and to make us worthy, my children, to live here well and in peace and to put us in paradise to glorify the Holy Trinity."

Third, Saint Kosmas, from what appears in his sermons, had clear knowledge that he was a prophet and indeed like the Prophet Elias (Elijah). Speaking of the Antichrist, whom he clearly identifies with the Jews who fought against him and eventually had him killed, he said:

"The Antichrist, my brethren, is a person who has an evil mind, an evil disposition, and has the devil in his heart. He says he is God and he will put to death the prophet Elias. Having examined the subject, my brothers, I learned and I understood that the prophet Elias and the Antichrist have come and that the latter has killed the prophet. Elias, my fellow Christians, has been alive all these years, and God knows where he has kept him hidden until today. If you wish to know where he is, he is near here, and the words I speak to you belong to him."

In another sermon he is more expressive:

"When the prophet Elias comes to teach, he will not reveal himself to the world, as the Holy Spirit says, so that by coming he will not turn everything upside down. Thus says the Holy Spirit, so that he'll frighten and shake the world and the earth. I don't want to reveal it to you Christians. But what is there to reveal, my children? His zeal and his teaching. These, too, the most-gracious God has made me worthy to reveal because of His compassion. And don't expect another Elias to teach you."

Because he had this sense, he encouraged that when Christians came forward to kiss his hand, to chant the dismissal hymn to the Prophet Elias. He says in one homily:

"Now your kindness has the intention to kiss my hand. May the All-Good God bless you. And if you all fall upon me, I will die. Is it not better to kiss the icon of our Jesus Christ and beg Him to guard me from the snares of the devil as well as the Jews, who are paying in full from thousands of purses to have me killed? I also pray for you. So again, my children, lest I embitter you, stand to my right and left and I will give you my hand. And do not grab it and pull on it, one person here and another there, because you will dislocate my shoulder and will kill me, for I also am a man, I am not an angel. And do not yell and deafen me. Walk forth, my Christians. Come forward all the holy priests and chanters chanting the 'Incarnate Angel'."

In conclusion, Saint Kosmas the Aitolos was not a western Enlightener, nor a precursor of Koraes, but an Orthodox Enlightener. His teaching and his work was intended to bring the people to repentance, that they may return to God, to know and apply the teachings of Christ, insisting on the life of the Church.

The teachings of this great Apostle to the Nation and missionary, but especially his spilled blood, call us: "Orthodox Christians, remain faithful to the traditions of your fathers, follow the teaching of Christ, the Apostles and the Fathers, use an education that is not related to the domination of reason, sensuality and philosophical empiricism, nor atheism and unbridled technology, but with the revealed word. Such an education can keep you free from the globalization of culture and the flattening of life. Such an education is possible not only to preserve you with humanity, but also alter other traditions, western and eastern."

Our master Father Kosmas, help us all to walk in your footsteps and embrace your teaching which offers meaning in life. Amen.