By His Eminence Metropolitan Hierotheos of Nafpaktos

A homily delivered at the celebration of the feast of the Sacred Church of the Entrance of the Theotokos in Levadia during a Hierarchical Divine Liturgy, presided over by His Beatitude Archbishop Ieronymos of Athens and All Greece, on November 21, 2010. 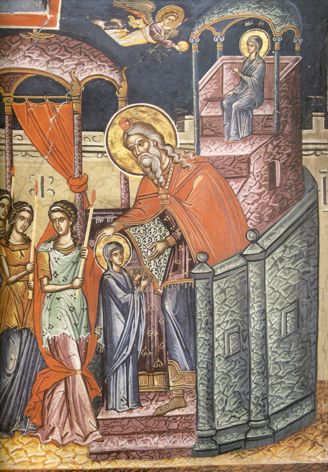 Every feast of the Mother of God is a cause of joy for the entire Church, and we celebrate it brilliantly, with hymns and doxologies, with a Divine Liturgy and litany, with words and silence, with pure thoughts and prayer of the heart. And this is because the Panagia is a gift of humanity to God as well as a gift of God to humanity and the entire world. She is "god after God, second place to the Holy Trinity," as we chant in a hymn.

This joy we feel on this day also with the feast of the Entrance of our Panagia into the Holy of Holies, a feast that shows the dedication of the Panagia to the Temple, her deification by grace and her essential preparation for the incarnation of the Son and Word of God. The Holy of Holies proved to be for the Theotokos a place of spiritual regeneration, a blessed and paradisaical place in which Adam and Eve lived after their creation. And the amazing thing is that Adam and Eve with their death-bearing disobedience to the will of God left this blessed place, while the Panagia with her life-bearing obedience, entered this paradisaical place, living in the Holy of Holies, like the first-formed prior to their disobedience.

This festal day is blessed for all of us. The city of Levadia is blessed, which celebrates this feast of the Mother of God. We are delighted to have with us His Beatitude Archbishop Ieronymos of Athens and All Greece. I consider myself honored that the always worthy Prelate of this Sacred Metropolis of Thebes and Levadia George, my beloved and chosen brother, commissioned me with this ministry of preaching, and I thank him from my heart.

The Panagia enters, therefore, the Holy of Holies and remains there in silence and prayer for twelve entire years and attains to deification, and this attracted God's love, in order to incarnate. The pre-incarnate Word of the Old Testament waited centuries for the right person to be His mother, and through her to enter humanity. So God Who is without a home built a home, through this blessed woman, the ever-virgin Mary.

The Panagia, according to Saint Nicholas Cabasilas, with the struggles throughout her life, but especially the grace of God, acquired in the Holy of Holies spiritual beauty, and in this way attracted God's eros towards humanity. This image of earthly erotic love is used here to show the beauty of the Panagia, as well as the eros of God towards humanity. Both beauty and eros were caused by the power of her inner life and not by the power of words and external activities. Besides, Christ reminded His listeners of the words of the Prophet Isaiah: "These people neither honor Me with their lips, and their hearts are far from Me" (Mk. 7:6).

The depth of the heart and what takes place there is what creates beauty and attracts God's eros. The greatest loves are internal and secret. Thus, as Saint Nicholas Cabasilas says elsewhere, the Panagia lived a "life that was all-immaculate, all-pure, refused all wickedness, exercised all virtues, had a soul purer than light, a body altogether spiritual,... a nous with wings that flew to the heights,... a soul that longed for divine eros." All these spiritual states of the Panagia attracted the Craftsman to earth and initiated His hand to recreate man. Thus, the human race was refashioned.

However, the inner beauty of the Panagia not only attracted God's eros, but He "eagerly desired the beauty" of the Panagia, and "He settled in her womb," according to the sacred hymnographer. According to Saint Gregory Palamas, God "longed for the secret beauty of her ever-virginity ... and He bent the heavens to descend." She also showed human nature to be beautiful. This is why Saint Nicholas Cabasilas says that her beauty and completeness proved human nature also beautiful. In this sense Saint John of Damascus sings to the Panagia: "O, daughter worthy of God, the beauty of human nature." 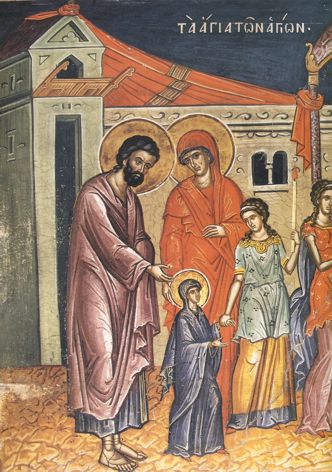 The Panagia is the greatest gift the human race has offered Christ. And this was done with her extreme silence and not missionary work, sermons, homilies and actions. It is significant that the Panagia did not undertake missionary activity within the Church, but she offered herself to God and became the mother of Christ, and by this doing the greatest mission throughout history.

Whoever similarly models after our Panagia, is adorned and beautified with the grace of God in their inner world, and they attract God's eros, and they become the beauty of humanity. Throughout her life the Panagia lived in the deepest silence. The hymn she delivered after the confession of Elizabeth, where she said she was the "mother of the Lord" - the well known Magnificat - "My soul magnifies the Lord," and the words she said to Christ after finding Him in the Temple at twelve years old, "Your father and I have been anxiously searching for you", and her supplication to Christ at the wedding in Cana, "They have no wine," are the only words preserved by the Panagia. She lived in the Temple in silence, in silence she raised Christ, and "she kept all His words in her heart" (Lk. 2:51). She lived in obscurity during Christ's activities, and in silence attended Golgotha, and lived in silence after Pentecost in the Church. However, she has benefited the whole world, and adorned humanity.

She worked like the operating glands of the human body, which help in their smooth operation. They don't make their presence felt, we don't feel pain from them, but when they operate well, they help maintain the health of the body. But when they don't work properly, they disfigure the human body. The Panagia and all the saints of our Church are the spiritual glands within the Body of the Church, and they help in its smooth operation.

All this shows that missionary work, which is necessary within the Church, is not activist (vita activa), it is not a number of external activities without content. Words are not verbose when delivered with substance and life, and silence is not idle because sometimes it can be stronger than words. There are works that transcend words. The more one perfects and sanctifies themselves, the more one helps the entire Body of the Church, as the Apostle Paul says: "If one part suffers, every part suffers with it; if one part is glorified, every part rejoices with it" (1 Cor. 12:26). The Panagia was glorified, namely deified, and thus adorned the whole human race.

Thus, the Panagia lived in the Holy of Holies in the deepest silence, and then gave her flesh to Christ the Word and became His Mother, so we can say that the Word of God, the booming voice of God the Father, received flesh from the life-giving silence in the Holy of Holies. This rational silence gave birth to a life-giving word, and the word that has substance and regenerates is an expression of silence. We know this from the human experience, since every successful action requires that good planning and programming is done which takes place in an environment of silence. Even the movement of Christ towards humanity is an expression of words and experience from silence.

We have many examples in our tradition about this. On the day of Pentecost the Apostle Peter, who experienced shock at the mystery of the Cross and the Resurrection of Christ, spoke to the people and with one sermon converted three thousand. I don't know of how many are saved by the thousands today with sermons that are fond of verbosity.

The silence of the Panagia teaches us very loudly, because it is the result of fullness of life. A well know psychologist and sociologist, Erich Fromm, wrote a book titled To Have or to Be?, and he applies it to all matters of everyday life. There are two possibilities: The first is to base ourselves on things that surround us, like money, people, glory of the world and strength of power, and the other is to base ourselves on what we are, in the fullness of our life in Christ. In the first case - "to have" - one becomes quickly disappointed, while in the second case - "to be" - we feel fulfillment. You don't fear anyone and you are free.

You, Your Beatitude, seek and exhibit the spiritual power of "being" and not "having". You don't exhaust yourself by what you have in life, but in what you are. You don't support yourself on insipid communication, but on substantial communion. You aren't interested in verbosity, but the essence of things. I know you aren't silent, but you don't speak like others. Your words are not divisive and polarizing, but unifying, which is why you scandalize some who cannot understand the power of weakness, they can't understand the articulation of ecclesiastical speech or the life of silence, when circumstances require. For one to understand fruitful silence and unifying words, it is a matter of life and inner fulfillment.

Therefore, Your Beatitude, pray that we will learn this mystery of the crying out of the Panagia in silence for twelve years in the Holy of Holies, where is the power of indestructible life, to learn silence of the heart and prayer, which is according to Saint Isaac the Syrian "the language of the future age," and then our words will have miraculous power. Amen.